Lanchester has a long history. At the time of the Roman invasion in the1st Century the powerful Brigantes inhabited this area. On their northward march the Romans built Dere Street from York to Hadrian’s Wall at Corbridge.

A staging post was established at Longovicium – now Lanchester. It became an important military stronghold. Longovicium was built both to maintain control over the area and to act as a major distribution camp for men, livestock, equipment and goods of all kinds. The fort was large, 160mx 140m, and held up to 1000 troops. Together with an extensive civil settlement it covered possibly 30 acres. Longovicium must have been very busy when it was fully occupied.

To supplement the wells inside the fort the Roman engineers built an aqueduct 6 km long to the west of the camp, which was fed by a reservoir created by one of the oldest dams of its type in the world.

Today the outline of the fort is clearly seen, 0.9km West of, and 65m above, the Village Green. It would have been a splendid vantage point from which to command the valley. The fort, parts of the aqueduct and the dam are Scheduled Ancient Monuments, but the alignments of parts of the aqueduct and Dere Street are not precisely known, making them difficult to protect. The educational and tourist potential of the Roman fort with the vicus (civilian town), aqueduct and dam might be realised one day.

The options have been assessed in “A Conservation Plan and Development Study” carried out for Derwentside DC.

ROMAN TIMES TO THE 17TH CENTURY

After the Roman armies left in the 4th Century, Lanchester shrank as it again became an agricultural settlement. Without Roman protection this area was vulnerable to raiders – Scots, Anglo-Saxons and the Vikings who inhabited this area around 800AD.

A hoard of Viking weapons and tools found at Hurbuck is now in the British Museum.

Construction of the magnificent parish church of All Saints began in 1143, probably on the site of an earlier Saxon church. The Roman fort was a convenient source of stone, 5 large columns coming from the headquarters building. The first rector of the church was recorded in 1147.In the Boldon Book of 1183 Lanchester is mentioned as one of the great manors of the See of Durham, surrounded by forests and moors.

Lanchester was becoming an important ecclesiastical centre, a deanery and college of canons being created in 1284 when the parish was ten times larger than it is today. There is at least one medieval house in Lanchester, Peth Cottage. The earliest part of this cottage dates from the 14th – 15th Century and is built of Roman dressed stone. It is said that Deanery Cottage could date from the 12th Century. 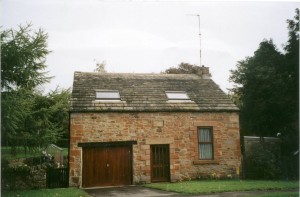 During this time the village grew slowly along the valley floor and around the Green. The present butcher’s shop was built in 1690 and the house that is now the Post Office in 1778.

A map of 1754 shows a settlement of 16 houses and a cornmill. It is said that the S-curve of Front Street was to prevent winds blowing straight down the street.

The Enclosure of Lanchester parish in 1773 followed by agricultural improvements led to much robbing of stones from the Roman camp for use in farm buildings and walls. Dressed stones from the camp are evident in many walls in the surrounding area.

Several large houses were built nearby; Greencroft Hall in 1670, Ornsby Hill House in 1778, Greenwell Ford a few years later, Burnhopeside Hall in 1800 and the present Colepike Hall in 1859.The prosperous families who owned these houses gave employment to men and women of the village and were a focus for the social life of the locality. The parklands that they created still form part of the attractive landscape surrounding the village.

Some late Georgian houses including Brook Villa and The Lodge were built looking out over the Smallhope Burn. Along with Deanery Farm, Deanery Cottages and the old Parsonage, the attractive buildings around the Green must have looked much as they do today.

The valley road from Witton Gilbert to Shotley Bridge via Lanchester was built in 1810 the population of our agricultural village then began to grow more quickly.

The original Methodist Chapel was built facing the Green in 1819. It became a smithy, then a joiner’s store and is now a cottage.

Lanchester was the judicial centre for north-west Durham. Petty Sessions were held and there was a lock-up. The most prominent group of buildings in the village during the 19th Century belonged to the workhouse, which was opened in 1839. The office, which was built for the Board of Guardians of the Workhouse, later became the Council offices, then the police station and courthouse, and now houses the library. 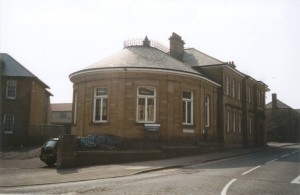 Bishop Bek Hall was also originally part of the workhouse complex – an imaginative and pleasing re-use of an old building to meet changing needs.

In 1851, when the Old Vicarage was built on Cadger Bank, there were 140 houses in the parish with 752 residents. The village continued to develop along Front Street and around the Green with most of the houses built of stone. The Alderdene Burn ran down the West side of Front Street to join the Smallhope Burn as it meandered around the Green.

The opening in 1862 of the Durham -Consett railway line with a station at Lanchester prompted the next surge in development. Terraces of houses were built on land near to the railway station and along the roads linking the railway station to Front Street, i.e. Station Road, The Garths, Prospect Terrace, Church View, Mount Pleasant, Railway Street and The Square.

The terraces nearest to the village centre were mainly in stone; others were in brick. The opening of the railway introduced the new roofing material that characterises the roofs of the village today – grey Welshslate. Before this, red clay pantiles or dressed stone slabs had been used. The present Methodist Chapel was built in 1868, the Endowed Parochial School (now the Community Centre) in 1875 and the Primitive Methodist Croft View Chapel in 1884.

In about 1905 Alderdene Burn was culverted and shortly afterwards the Co-operative store (now Lanchester Carpets and Peters’ Bakery) was built.

The present Roman Catholic Church in Kitswell Road replaced a ‘tinchurch’ and convent in 1926. In 1937 the Smallhope Burn was culverted under the Green. This increased the size of the Green but hid the burn from view.

In the same year Alderdene estate was built. The larger Burnhopeside/Deneside estate followed soon after the end of the 2nd World War. These estates reflect the style and standards of the time, being well built in rows of red brick semis with gardens front and rear. The road and footpath network was designed for a time of low car ownership, when garages were not thought to be necessary.

By 1961 the population had reached 4050. The development of the village then accelerated again.

During the following 11 years 4 housing estates amounting to over 500 houses, 2 schools and an old people’s home were built. These private estates were constructed by builders to their own designs, generally with garages. Part of Front Street was demolished and replaced by a row of shops that are typical of their period.

In 1966 the railway was closed. (It has since been converted into the very popular Lanchester Valley Walk.) In 1970 the by-pass was built, easing traffic congestion. In 1973 jobs were lost when the livestock mart closed, soon to be followed by the Siris factory.

Since then there has been significant further housing at Valley Grove, St. Bede’s Court, Oakwood, Greenwell Park, Fenhall Park and Lee Hill Court. However, fewer people now tend to live in each house, so the population of Lanchester ward, which was estimated at over 6,000 in 1973, had dropped to 3,900 by 2001.